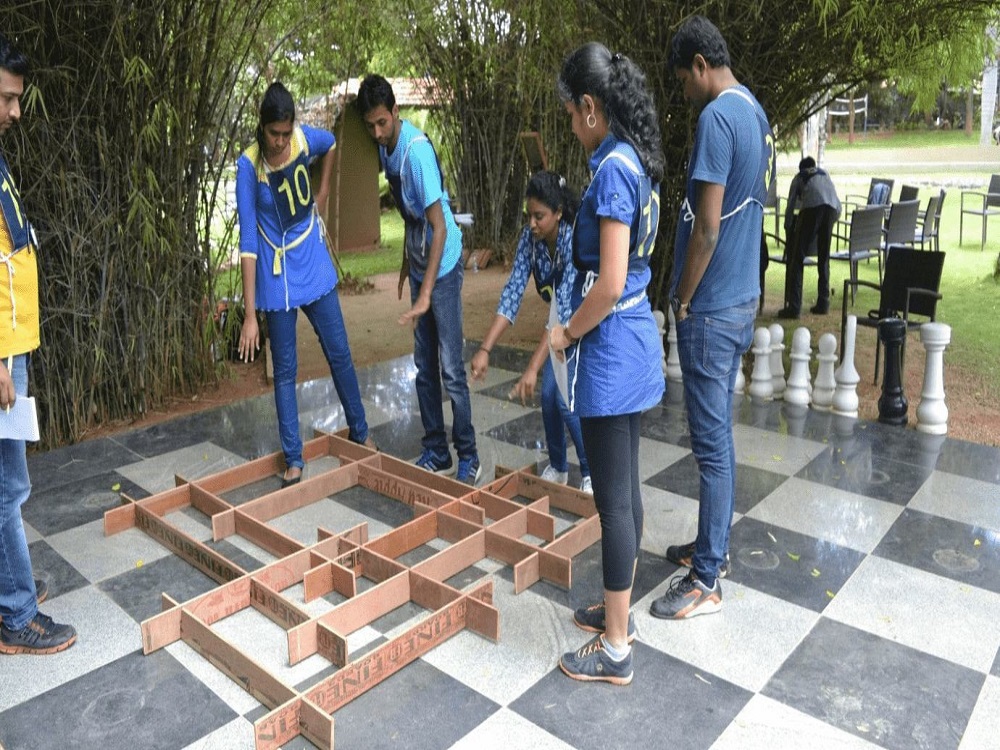 “Remember, teamwork begins by building trust. And the only way to do that is to overcome our need for invulnerability.” — Patrick Lencioni

Nothing. The word that encompasses the future and the past of any conversation. Whether you are on a date or an office meeting, it always alarms people when you answer their question, “what are you thinking?” with, “nothing”.

A lot of people don’t comprehend that when we say we aren’t thinking anything, we actually are thinking of nothing. Imagine you are on a corporate team outing in Bangalore and sitting in front of a bonfire and your colleague asks you, “What’s up!” and you go “nothing”.

They immediately think of something morose or upsetting is going on in your head while looking at the fire. In a corporate setting it is often thought of as a ploy or something fishy. That’s why, employers usually come up with team building activities to understand their employees better and and let them connect with each other on a deeper level so silences could also become comfortable.

Company team outings can be fun when coupled with Bon-fire and team activities. Team outing can be therapeutic at times for employees and a reason to unwind. That is why, resorts offer a host of options for corporate team outing in Bangalore starting from rewards and recognition programmes to adventure activities.

I will list some of the best team building activities aka games that will make your corporate team outing in a resort a much more fruitful experience.

Purpose of the game: To improve communication and listening of the team.

Blindfold can be played in groups of four or six depending on the strength of the team. It is one of the ice breaker games companies perform with their employees so they can loosen up can get to know each other better.

If the team has achieved the goal easily, you can try setting a time limit and ask them to try different shapes such as that of a star, hexagon, rectangle, et cetera.

Members required: A large group of people maybe 10 or more.

This is one of the most hilarious team building games that you should definitely give a try on your next team outing in Bangalore.

Practice Walk and Talk for about a minute. To add more fun repeat the same instruction twice, may be thrice. Then ,swap them. They walk at Stop and Stop at Walk instructions.

You will see a lot of people already chuckling and breaking into laughter because of the mix up. Some people even find keeping up with instructions mildly annoying.

Considering how the group is performing, you can add Clap and Name then swap them too. Now, we have four commands that simply mean do what the other says.

You can also eliminate people who fail to follow more than two commands or simply ask them to keep a track of how many mistakes they made and when.

Lastly, you can add two more commands ‘Dance’ and Jump’ in the mix. Do this for a good thirty seconds along with the above instructions and then SWAP them too.

Purpose of the game: Interaction. Knowing other team members.

Shout out is a simple team building game but is highly effective when it comes to come to employees showing gratitude towards each other.

Materials: Sticky notes, pen, markers and paper or white board.

Campfire stories is a game or activity played during a corporate day outing in Bangalore. You set up a campfire and gather people around it and let them tell their stories based on the keywords or topics you provide them.

The game ensures that the team gets to open up about their good and bad days. While establishing strong bonding between the team members.

Time to complete the activity: 35 – 60 minutes depending on the size of the team.

This might sound a little off putting at first but it becomes fun as it gets acted on. Bring out your creative side by making a movie in a office related topic or subject. It could be a drama, tragedy or comedy.

The experience is more fun when you inform the team beforehand that there will be a short film making competition during the team outing in Bangalore.

Materials: Tennis ball ( a dozen of them) and Buckets, depending on the size of the team.

This is a fun and simple game you play outdoors with your team to improve team efforts and collaboration. It requires maximum focus and reflexes from the team members in order to win the race.

Members required: Five people per team with one volunteer.

Materials: Regular day to day objects along with pens, charts and markers.

This is yet another team building game you play with a large group of people by dividing them in teams of bot more than five people. Individuals try their hands at creating business strategy on objects.

Time to complete the activity: 45 mins to an hour.

Activity #8: Jump in and jump out.

Members required: Over 20 people in an open space.

Materials: Hand Sanitizers and masks since the team members are to come in contact with their team members.

Members required: Over 5 people. Or you can divide the people in groups if the team strength is bigger.

Materials: Subjective to the game.

Scavenger Hunt is a classic game which involves everybody in the team to work together to achieve the end result. It is the most sought after team building activity during the corporate team outing near Bangalore.

Time to complete the activity: one hour to half a day.

Members required: Any. Divide the group in equal teams.

This is a simple game as far as team outing games go because it doesn’t require much efforts but works as a powerful tool of communication between people.

Time to complete the activity: 15 – 30 mins depending on the strength of the team.

These are some of the most fun games you can try out during the team outing in Bangalore besides those that are available in resorts.