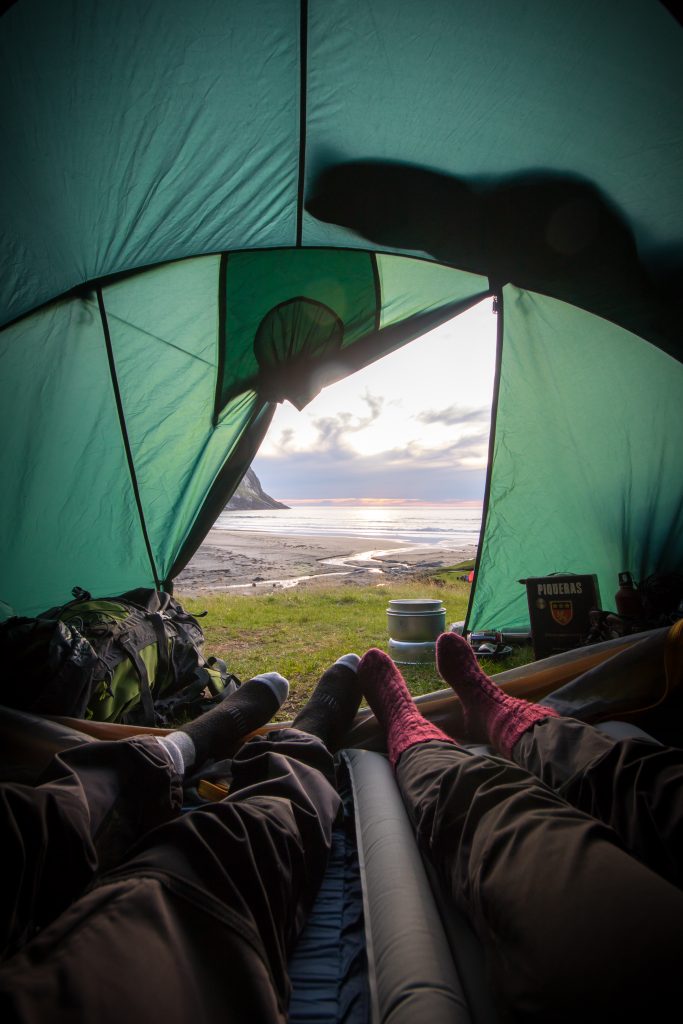 A complete guide for your first camping trip – Part II

Piña Colada Traveller. A term my mind conjures when I see people posting selfies of themselves from an exotic location or a camping trip. In an attempt to stay relevant on Instagram with the hashtags #wanderlust and #lovetotravel people end up doing the most embarrassing things and don’t mind going to any extent. If your idea of catching a sunrise early in the morning is to take a thousand selfies trying to adjust your other shoulder so you both fit in the most awkward frame, not because you must take a moment and gaze at the magnificence of mother nature in its glory then you are a Piña Colada Traveller. If you are an odd man out with your dressing, and capturing everything with your selfie-stick then you are a Piña Colada Traveller.

A Piña Colada Traveller is someone who wants to have fun but not at the cost of losing the luxury and comfort they have back where they come from. Which is absolutely fine too. We deserve all the comfort and convenience even when we are away from home. After all, that is what we pay for – to get the most out of the services we are promised.

The debate between a tourist and a traveller becomes more appealing when you start putting together the pieces from your own life. The difference amounts to a simple thing: your travelling companion. For example, if you are travelling with your family, you don’t care about the history of the place, its culture, the number of languages they speak, and don’t appreciate compromising on food and accommodation.

The itinerary is to visit the places your guide suggests or your travel package covers without going out of your way to try something outside of your comfort zone. You don’t risk living without your phone service, WiFi, sleeping in a tent unless it involves facilities that fit your needs same as the city. Which is why the concept, Glamping exists. We will touch upon Glamping later in this blog.

On the other hand, a traveller is somewhat the same but open to taking adventures, more accepting to the place, and tries to blend in with the local culture, at the same time takes interest in people, their language, how they think and most importantly, how the whole experience can be useful in seeing what he has to see and also what isn’t on the internet.

The preparation in both the cases are the same. You have to prepare for the worst and expect the best. However, travellers don’t mind going without phone reception, eating at a place that serves only local cuisine and drinking water from a cistern.

That does not mean one has to look down on the other or hold a moral high ground of some kind because people think differently. Some choose to be in a controlled environment while on a trip. To do everything by the book – maybe because they have families and loved ones to look after and concerned that if one person’s health is at risk, everyone gets affected automatically which might cost them months of planning, exhaustion of several paid holidays, and above all, the trip.

For Indian families it is a way of fulfilling a promise and taking the place off the list before we have kids, while our kids are a certain age, or old enough to look for after themselves.

To take the concept of controlled travelling further, places in and around Bangalore offer similar experience in the form of camping trips, keeping in mind the uncertainties that might befall when you go on a hike and stay in a tent in the middle of nowhere. All you have to do is pick a date with the type of tent you want and you will be offered a licit camp-like landscape coupled with Bon-fire and night air-gloe. These campsites are available all around Bangalore, most within 100 kms radius.

There are different types of camping:

Glamping is short for glamourous and camping. The idea of Glamping is to stay in tents without having to compromise on the essentials of the 21st century during your camping trip. Which might be WiFi, beds, bathrooms, electricity, etc. It has only improved with time and become more advanced while giving you an out and out camping experience.

The terminology might be new but it’s a several century old concept. Back in the 15th and 16th century, when Kings and Queens used to travel from one city to another on Mikdembers, their entourage would carry tents with grade-A interiors that ensured the same facilities and amenities as the comfort of their palaces. It was also a form of service provided by host countries for visiting emperors as a token of appreciation.

It is an effective way to attract visitors to stay in camps in a resort setting. Some camps are even available near water-bodies at a reasonable price, coming remarkably close to the offerings of four and five star hotels.

When we set out on a camping trip, we are usually forced to travel with extra luggage, since the weather on the mountains is often unpredictable and rains usually fall when they are least expected. Imagine circling around the bright flames of birch wood, after a four hour hike and as you start becoming one with the breezy warmth in the air, and there arrives the nightmarish downpour leaving you no choice but to rush to set the tent and getting drenched all over. If it were a Bivvy sack, the end result would be somewhat different.

Bivvying is not the traditional camping tent. Rather, it is a much more durable and effective alternative to tents that provide shelter from rains, chilly weather, and nocturnal insects. It is a minimalistic over-all for people who like to travel light and at the same time don’t risk being affected by severe weather conditions.

They are fully waterproof and come in different fabrics depending on the type of camping you plan to take.

When you think of a tent, you usually fall for the first things come to mind. Maybe a picture of a couple posing in their tent against the sunrise or a backpacker cooking his morning meal by the lakeside with a view of the mountain in the background which cuts through single roads.

A Tent camping trip basically incorporates all kinds of camping experience in one, such as motorcycle camping, adventure camping, and even backyard camping since it only involves setting of tents on friendly surfaces. It doesn’t need planning in advance but requires a little bit of risk analysis if the need arises. You don’t have to travel deep inside the forest. You can setup a tent in the backyard of your hotel or your house and spend the evening unwinding after a stressful week. The best thing is it doesn’t require travelling except for coals and firewood in case you wish to roast some chicken or setup a barbecue.

You can either go out in the wild catching animals for food in the forest for which you need hunting experience or be calculated enough to carry raw or half-cooked meals that lasts for a long time not so far away in the woods. Tent camping is an amazing way to reconnect with the wilderness of nature even if it’s for a short period of time.

Adventure camping is a bit more serious than any other camping in this list. It is for people who love hiking by the day and camping during nights. This type of excursion requires training and resilience to survive in extreme weather conditions since you cannot afford to trek with heavy luggage through the mountains which will not only slow you down but tire you way sooner than you realise. Therefore, don’t carry excessive luggage.

People go through months of training, diet control, and test camps so they can be prepared for the real perils that the wilderness might bring. There are no restaurants in the woods, no faucet to turn for water, no toilet seats, only the sound of exotic birds and yourself in the middle of nowhere, testing your primitive abilities of survival.

Make sure the place you are camping to has a local body that allows camping before going on venturing into the unknown.

Car camping is a direct way of going on a hike to places where cars are allowed. The risk factor is less as the choice of places is limited to where you can take your unit. One great benefit of car camping is that you don’t have to look for flat surfaces to set up tents nor do you have to worry about the rains, heatwaves, or windy weather. You can find a parking space and easily nestle inside your car during the night while travelling in the day time.

A lot of travellers and campers think this is not real camping because you are always in a safe zone, whether you are in the open or having a meal. It takes away the experience but each camping comes with a power play as well as drawbacks and this is no different. People living in cars don’t have to spend much on tents, sleeping bags, or even worry about any other accommodations. All you need is a stove and a few kitchen utensils to cook a meal and head back to their car.

Any experience you have outside of your comfort zone is important. It does not matter how you bring that to fruition. Whether you travel in a group or a solo dispatcher who prefers to travel by themselves. It is important that you travel as much as you can and as far as your will takes you.

The movies for once get a few things right and one of them is travelling. When your favourite character is heartbroken or failed in something they set out to achieve, you see them take the highway on a bike, contemplating their future and coming to terms with their present situation, and the next thing you know is they are climbing a mountain which is always synonymous to success.

Having said that, real life is different from the movies. We all realise it very well. Of all things, traveling should not be associated with failures or heartbreaks. You need to convince yourself that you don’t have to find an excuse of failures to have a ‘change of a scene.’ The perception around travelling or going on a hike or on a camping trip is that you have finally found independence that was long due because of a relationship you were in or a job you had and you are making a perfect use of that independence.

You can plan your weekend getaway in the Gari Resort and take back only good memories of wholesome food and a great camping experience with you. The place is tinged with recreational activities that are enough to unbridle your feral side. At the same time it offers a squeaky clean accommodation with an opportunity to not race against the time and take a moment for yourself by disconnecting from the world and simply existing. You can book your stay in the form of rooms and tents.

If anything, a person who travels often would be able to separate the two. It is a liberating experience but purely because of how it reshapes your understanding of the world as a person. Travelling is a practice/skill you hone over a period of time. It is rarely a temporary distraction or escape from something that you cannot make peace with. Mostly because it insists you to live in the present moment because we travel to make new memories which erase the existing ones.