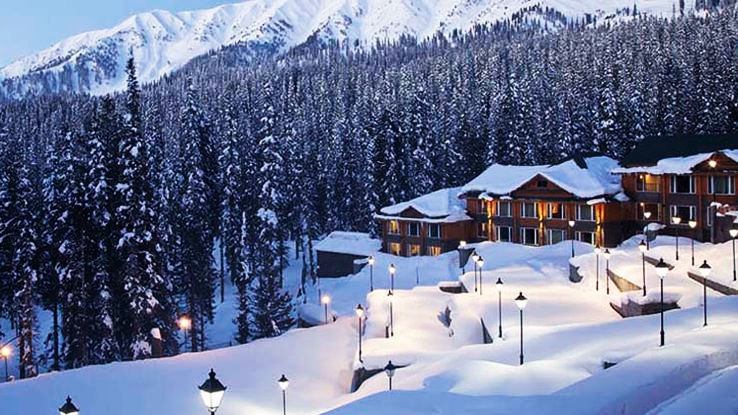 Five Snowfall places in india you must visit.

We are a country of explorers. We are over the top curious and always ready to venture in the unknown – sometimes even alone. Most of us live in cities that don’t get colder during winters. So we plan our lives and holidays around cold places. When it’s summer, we either plan to travel to the best cold places during winter, or we choose the nearest hill station with the kids to escape the summer heat but we have to be somewhere we can shiver with slight hypothermia.

We love travelling to cold places because winter is our favourite season. Most often we find ourselves saying, ‘it was so cold last night that I didn’t step out of my house, I bet it will get even colder and I should start taking out my winter clothes.’ Admit it or not, winter brings out the funny side of even the most serious people we know, along with a lot of fun outdoor and indoor activities that it brings. The neighbourhood uncle who was always a strict dad to your friend, now wears a monkey cap and a Gamcha(scarf) and keep rubbing his palms while on a night walk.

Almost everyone in our families look, appear, or sound skittish during winter – at least tries to be. A part of you always wishes that when you turn the faucet in the shower, there should be a sudden sprinkle of cold water on your bare chest as a surprise element so you can shout in shock and make everyone laugh, so you can feel the thrill of the season and the excitement it brings to you as a man or a woman, doesn’t matter your age, lineage.

Metal objects become devilishly cold during winters. Every time you touch a metal object without a forethought, you are thrown off balance as if possessed by a sprightly little ghost. When your tongue gets stuck to a glass while drinking water, when you can’t go on an evening stroll without a sweater, realise that the winter is finally upon us and get hold of the winter wardrobe. Besides festival sweets and offerings, winter as a season is the most celebrated time of the year. There are winter sales all around cities, the streets are wreathed in jumpy lights, online shopping services run tons of schemes in order to attract customers and everybody is in high spirits.

No matter how old we are, what we do, we always find excuses to travel to chilly regions specially during winter holidays to make it even more fun. Places that experience heavy snowfall are the most sought-after places during winter, specially with kids around. Who am I kidding, even adults find their inner child at the sight of snow!

Let’s look at some of the best snow-covered places in India for the year 2020.

Gulmarg – Jammu & Kashmir: For those with wanderlust.

Gulmarg means meadow of flowers which is exactly what the snowy town of Par Pinjal range is. It was found by a Kashmiri Ruler Yusuf Shah Chek in 16th century and later brought to attention by the British who liked to spend summer holidays here. It soon became India’s most popular skiing and tobogganing destination for enthusiasts of the sports. It is also popular among families and newly married couples to spend quality time with their significant other.

Take a walk of the place and dip yourself in the Kashmiri cuisine. Don’t forget to look for noon tea. It is a pink coloured Kashmiri chai with salt in it. I realise it sounds a bit out of the place but you will fall in love with the tea from the first sip and would definitely inquire how it’s made. The place is delighted with Kashmiri cuisine.

Kashmiri food is purely for prefer non-vegetarian food. Some must tries here:

With everything Kashmir has been through politically, Gulmarg still carries its tradition of welcoming travellers from around the world with both arms. It truly does represent the spirit of higher power in its truest forms. Don’t forget to hop on the Gondola ride. Who am I kidding, that is the first thing you will do after reaching Gulmarg.

Things to do in Gulmarg:

Located on the Mussoorie-Chamba Road, Dhanaulti is one of the most interesting snow-laden places in the Uttarakhand. It is untouched, unexplored and not that known to travellers. Since there are many tourist locations around, people actually don’t prefer seeing the same thing repeatedly and give this tiny site a pass, that is what makes Dhanaulti more interesting because of how peaceful it gets here.

Enthusiastic travellers and trekkers who wish to take a step back, away from the crowded places prefer coming here to take shelter amid the thick tower of trees and rich green meadows. This is one of the best places to visit during winter, especially in December and January when it experiences snowfall.

Places to visit in Dhanaulti:

Due to the less known characteristics of the place, there aren’t much options available in the vicinity. However, hotels, home stays and hostels have their own kitchen and restaurants that serve food.

The land of Monpas, a nomadic tribe living in the town which has been a contribution of two names, Ta which means horse and Wang means Chosen after the most believed legend. It is believed that in the pursuit of a place to build a Monastery, Mera Lama Lodre Gyatso meditated to reach so to show him the perfect site. And, as he opened his eyes, he found out that horse was nowhere in sight. The pursuit of horse now became a search for his lost horse.

After a relentless search, as he reached the top of a hill called Tana Mandekhang, he saw his horse standing on the same ground which had a palace of the king Kala Wangpo. Believing it to be a sacred place and the sign from the almighty, he laid the foundation stone of the monastery which was eventually finished in the year 1681. It is now the largest monastery in India and second largest in Asia.

Tawang landscape is right out of the postcards we use to see as kids. This picture-perfect town is not only not only known for its monastery but the breathtaking mountains and divine energy it imbues in travellers. It is snowed in for most part of the year.

Places to visit in Tawang

Where to eat in Tawang.

Have you ever gifted someone or seen a glass ball with couple inside it where the two people rotate and the snow falls over them? It is exactly how Manali looks and feels during winter each year. The time between December and February is a typical snow globe month which makes it an ideal holiday destination for couples and family with children.

When the blanket of snow covers the mountains and the pagoda style houses giving just a hint of sunlight, it feels as if Mother Nature has built herself a blanket Fort. Besides being the most romantic place in India, Manali also hosts plenty of adventure sports to tickle the enthusiasm in you.

Things to do in Manali

Visit to Rohtang pass maybe a challenge because it is closed for most part of winter starting November. It is recommended to check the status with a local body before starting for Rohtang.

However, Solang Valley is a place for nature enthusiasts and those looking for a fun time in the snow. You’d find yourself taking one too many pictures of this idyllic site.

Places to eat in Manali

Random fact: Do you know people take pictures of a solo mountains, landscapes and alpine rivers running through the foothills but as soon as it starts snowing, they have to jump in the frame to take a picture with the white mountains as backdrops. Named after the Viceroy of India Lord Dalhousie who was also its founder in the year 1854, this chirpy little town sits between five hills, Bathalagh, Potreyn, Terah, Bakrota and Bhangora. Dalhousie is one of the most visited and popular hill towns in India. It enthralls you with its dense flora and fauna throughout the winter but the hill station only becomes more pleasant in winter. You will want to click pictures in every corner of this town because of its natural aesthetics, which only accentuates with snowfall.

It is one of the first choices when it comes to visiting Hill stations with your significant other. It is perfect for solo travellers, wayfarers, and backpackers who are looking for a slightly laid back getaway in the arms of nature. But, as laid back as the place is, not exploring it would be unwise. Take a walking tour on garam sadak and try the local cuisine in one of the markets. Go trekking in the woods of Kalatop through the piquant pine and oak trees to breath the fresh air around you. Strike a conversation with the locals. They are some of the most friendly people you will encounter in your life.

Places to visit in Dalhousie:

Where to eat in Dalhousie

These are some of the best tourist destinations in India to visit during winter which are also solo traveller friendly. If you are someone who likes to relax in the lap of mother nature, appreciating and soaking it’s beauty in the form of sunlight, mountains, snowfalls, trees, and most importantly like to see different culuture closely, then these places will add to your good personality.

Although the tourism industry is still recovering from the loss during the Lockdown, travellers have started backpacking. Families have begun planning their trips, hostels, home stays, hotels, and other accommodation facilities are running offers on stays along with travel websites, airlines, and bus services. It goes without saying that all of this taking place keeping the best foot forward with Covid-19 guidelines laid out by state and central governments.

It is necessary to check the state government policy on incoming travellers especially when your state/city has high number of active cases. There are chances that you still have to quarantine yourself for a couple days if not 14 days. All said and done, refrain from travelling without the necessary precautions such as masks, gloves, safety suit, and hand sanitizers.